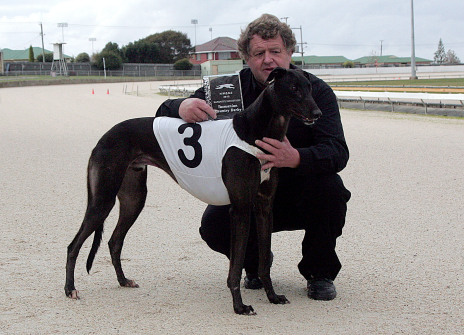 Zavance Man for Mangalore trainer Ted Medhurst should continue his winning form in heat one of the Club Hotel Silver Trophy at Tattersall’s Park tonight.

Having won 11 of his 16 starts and his last three up North this son of Head Bound loves the rail and from the cherry looks very hard to stop.

With a lot of speed in the race the only worry is if he doesn’t get to the rail first because Shanlyn Hirdy won’t give it up once he gets on the bunny.

November Digger’s experience must be a factor while Wynburn Diamond should be taken in the multiples.

In the other heat Rewind’s clash with New Recruit will be a highlight with both in great form it has all the hallmarks of a match race.

Perhaps New Recruit purely because he is going so well on the track.

The Black Buffalo Distance Stakes should be another terrific clash with five greyhounds listed under $4.50 it really is a punter’s nightmare.

Silent Giggle is in form but drawn wide, brilliant bitch Bell Haven has to be included although slightly out of form while Pippi’s Gold and Decembrist have got solid claims and strength in their respective legs. Decembrist on class from outsider Custodian and Bell Haven.

Intense Suspense (R5) should be hard to beat.