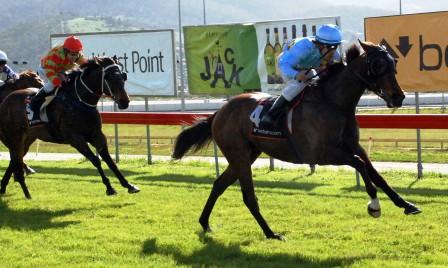 TALENTED middle distance performer Zellarcy looks set to make it back-to-back wins when he steps out in the thetote.com.au Handicap (race 5) over 1600 metres at Tattersall’s Park in Hobart today.

Zellarcy could not have been more impressive in winning over 1420m in Launceston last start, which was his second run back from a spell.

He steps up in distance and will carry one more kilogram than last time out but he is a big, strong gelding that has the capability to carry hefty weights.

The David Miller-trained six-year-old has plenty of early speed but rider Kelvin Sanderson may be able to take a sit if either Risk It or Heartbreak Kid is allowed to lead and dictate terms.

Zellarcy is the likely favourite but it would be unwise to take too short a price with $1.80 acceptable.

Winay Wayna will be out to make am ends for her last-start second on this track, which was no fault of her own.

She resumed from a lengthy spell with an encouraging effort in Launceston but when dropping back in class to a maiden/class one she finished a luckless second to Neil’s Gold this track over 1600m last week.

She was run off the track on home turn that cost her at least two lengths. She steps up in distance here but she gives the impression she will stay. She is in a race with many chances so expect odds of around $4.00.

Lightly raced five-year-old Megaraptor looks a good anchor in the last leg of the quadrella (race 8).

Megaraptor returned to racing from a lengthy spell with an incredible win on the new synthetic track at Devonport on September 4.

It was his first start for six months. He was last turning for home and to come from that position and win by a half length against strong opposition was an amazing effort.

The Charlie Goggin-trained five-year-old followed up with a seventh of 11 in a strong class 4 event over 1400m in Hobart last week. He was slowly away and allowed to settle last. When improving he was kept to the inside rail and ended up running up behind a wall of horses in the home straight and went to the line under a firm hold. Forget he ever went around. Has the services of a talented senior rider here and that should enhance his chances.