Zellarcy near the end of his tether 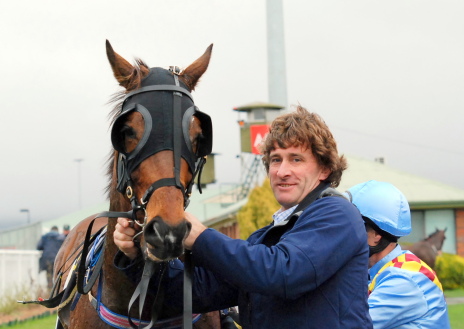 WHILE the long-term future for handy sprinter-miler Zellarcy might not look bright there is no doubt he has been a great money-spinner for his owner-trainer David Miller.

Zellarcy notched his 11th career victory when he powered home to win the Sportsbet Open Handicap over 1650m at Tapeta Park Spreyton on Sunday.

Zellarcy came with a well-timed run to edge out jay Bee’s Gee Gee and race leader Makes Cents in a hard-fought finish.

He again was forced to carry top weight of 59 kilograms which is something he has had to cope with for some time given his outstanding record.

“He’s been a good old horse. A real bread and butter horse because every time we’ve brought put him in work he’s won a race,” Miller said.

However the trainer says Zellarcy might not be as competitive when the weights catch up to him.

“He is a couple of lengths off being competitive at weight-for-age class and that’s about all that’s left for him here now.”

“He is about to be weighted out of handicaps and he isn’t an apprentice’s horse, so I can’t really claim on him,” he said.

Zellarcy lugged 59 kilograms on Sunday with Kelvin Sanderson aboard who has partnered the gelding to six of his 11 wins.

If Miller nominates and accepts for the 1650m race at Devonport on Sunday week he will no doubt be handicapped to carry 60kg.