Zellarcy on track for tilt at Devonport Cup 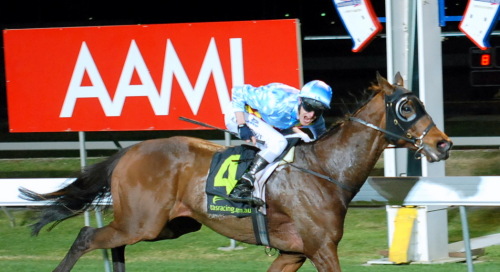 TALENTED middle distance horse Zellarcy continued on his winning way in Launceston last night with another game display to win the Sportsman’s Hall Hotel Open Handicap over 1600 metres at The TOTE Racing Centre.

Zellarcy began well but when Rock This Party’s rider Jason Maskiell opted to lead at all costs Zellarcy’s rider Kelvin Sanderson opted to take the trail.

It proved to be the winning move as Zellarcy settled well and when Sanderson called on the David Miller-trained gelding to extend at the top of the home straight he quickly put two lengths on his rivals.

He hit the line almost four lengths clear of King Of Gondor with Old hands and Heartbreak Kid less than a half-head astern.

It was Zellarcy’s eighth career win and his third in succession over 1600 metres.

Miller has his sights on the Devonport Cup (1800m) and a part of his plan was to send the horse to Victoria for a couple of runs but the trainer has shelved those plans.

Instead he will give Zellarcy a two-week break in the paddock and look at a program that will be aimed at having the horse at his peak for the Devonport Cup to be run in the first week of January.

Listen to what trainer David Miler and jockey Kelvin Sanderson had to say about Zellarcy’s latest win – click here .